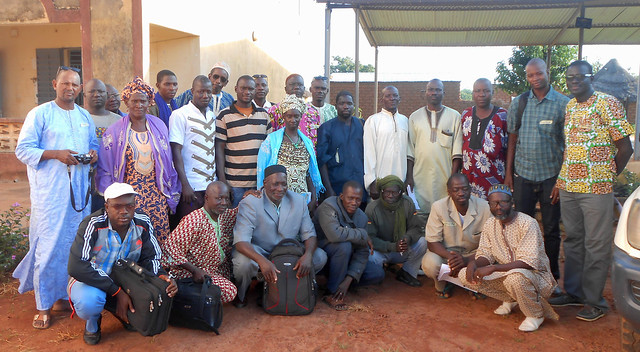 The platforms are a key part of the Feed the Future Mali Livestock Technology Scaling (MLTS) program, which aims to improve livestock production and related incomes for 61,000 households in the country.

Their establishment follows a training workshop, held 17-27 September 2016, for facilitators identified by the MLTS program partners who include the SNV Netherlands Development Organisation, L’Association Malienne d’Eveil au Développement Durable (AMEED) and Catholic Relief Services. The workshops were facilitated by the International Livestock Research Institute (ILRI) and took place in the respective regions.

The four CAHPs, in each of the four program intervention communes—Farakala in Sikasso, Sincina in Koutiala, Sofara in Mopti and Djenne commune in Djenne—bring together 20 to 25 members including farmer cooperative leaders, live animal traders, private veterinarians, transporters, feed producers, government veterinarians, microfinance staff and representatives of NGOs, local government and the Ministry of Agriculture and Livestock.

The establishment of the CAHPs was carried out in two phases.

In the preparatory phase, the training module on how to set up an innovation platform was designed by the program team and a guide for facilitation and replication of the CAHP was created for use by facilitators.

Facilitators in these CAHPs have been trained on the role of innovation platforms (IPs) in agricultural development and IP structure and governance including the roles and responsibilities of members. More specifically, to address the needs of the MLTS program, the facilitators were trained in diagnosing and prioritizing constraints in the ruminant value chains in each of the four regions and in designing actions plans to tackle priority constraints identified by members.

Participants in the training workshop also learned about the MLTS program monitoring and evaluation indicators which will guide the activities and measure the performance of the animal health platforms.

The MLST program targets increasing income, food and nutrition security of actors in the cattle, sheep, and goat value chains in Mopti, Timbuktu and Sikasso regions of Mali by improving ruminant livestock productivity and enhancing the volume and value of livestock produced and marketed in these regions.

By bringing together producers, private and public veterinarians and local authorities to harness collective action, the CAHPs will play a key role in addressing animal health and ruminant livestock value constraints. Initially, the platforms will focus on finding ways of ensuring easier access to adequate animal health inputs and services as incentives for the adoption of disease prevention and control technologies.

They will also explore how to link community animal health workers (CAHWs) with private or public veterinarians for adequate supervision of activities and explore ways of diversifying income generating activities of private veterinarians to sustain their enterprises. The platforms will also arrange contractual agreements for the supply of veterinary inputs and services and will be involved in planning, coordinating and evaluating vaccination campaigns in addition to fostering policy dialogue on animal health policy issues.

The program team expects that, soon, the four CAHPs will be replicated in the other 29 program intervention communes. A capacity assessment of the needs of the institutions and individuals in the IPs is planned in 2017, followed by a training on strengthening technical, managerial and institutional capacities of platforms members.