Please give us your feedback in the space below

While designing the Livestock-Fish proposal, our working hypothesis has been that small-scale livestock and aquaculture systems are an important source of the limited amounts of animal-source foods (meat, dairy products, eggs) that currently figure in the diets of the poor, and that by increasing productivity and targeting the poor in these production systems and their associated value chains, we could simultaneously improve food security, reduce rural poverty and reduce under nutrition (which now figure as 3 of the 4 CGIAR system-level targeted outcomes).

We therefore set our over-arching goal to “increase productivity of small-scale livestock and fish systems so as to increase availability and affordability of meat, milk and fish for poor consumers and, in doing so, to reduce poverty through greater participation by the poor along animal source food value chains.”

Our reasoning is based on three key facts:

Evidence from our work and the literature to support these statements is cited in the proposal on pages 2-5. We stress that these are patterns characterizing lower-income countries particularly in sub-Saharan Africa, South Asia, South East Asia, and Central America. The situation is obviously dynamic and evolving and there are certainly counter-examples from some of the emerging economies, such as the importance of large-scale pig and poultry production in China, but we expect these patterns to persist in the countries and contexts that will continue to be the focus of CGIAR efforts.

The Consortium Board in its review concludes that “the articulation between improving productivity of livestock and fish and of their value chains and better nutrition for the poor is not currently very convincing. There are many examples of work on increasing productivity that does not automatically benefit the very poor.”

The Board therefore recommends that “the proponents’ case in this respect should be strengthened.”

We propose to address this recommendation by putting better into perspective our focus on small-scale production systems and their associated market systems in meeting the needs of the poor for animal-source food.  The figure below is perhaps a good starting point. 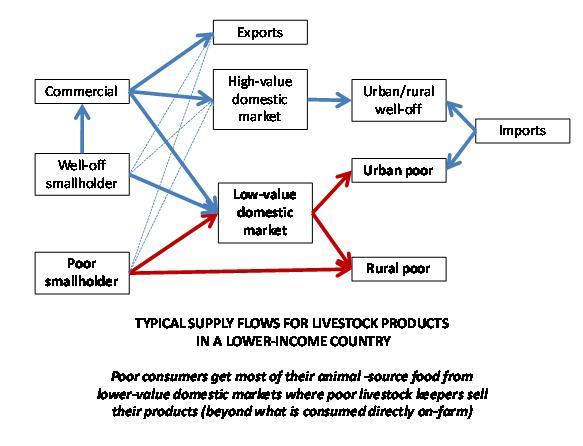 The figure presents typical flows of livestock product supplies in a lower-income country (due to economies of scale issues, fish production may be related more to small and medium-scale commercial aquaculture rather than smallholder farms as such). An important feature of livestock and fish markets is the linked nature of high and low-value local markets: production of prime cuts for better-off consumers or export at the same time supplies lower-priced by-products to the lower-valued market for lower-income consumers.

Pro-poor productivity improvements would increase supplies generated particularly by poor livestock keepers in the medium term, but also undoubtedly increase production among better-off smallholders through spillovers and as the benefits to poor livestock keepers lead them out of poverty into the better-off group. Though some benefits would be captured by the better-off smallholders, we would view this as an added indirect and positive outcome.

Much of the new production will supply lower-value domestic markets, where our pro-poor value chain development efforts will seek to improve efficiencies and benefits for the poor dependant on these value chains for their livelihoods. Improved efficiency at farm and market level and increased supply will keep downward pressure on prices, keeping products in these markets affordable and accessible to the rural and urban poor who depend on them for their ASF, allowing them to improve –or at least protect—the quality of their diets.

We fully recognize that there is a lot of ‘leakage’ across markets and producer and consumer groups, which one reviewer raised as diluting potential impact. For example, some of the smallholder production increases can be expected to end up in commercial production or higher-value formal marketing systems serving the better-off consumers. But such leakages also contribute to positive outcomes since they imply increased income is captured by the poor—contributing to more and better food purchases—and because the linked nature of the two markets means that increased supplies to high-value markets also result in more by-products going to the lower-value markets; therefore, we do not see such leakages creating any fundamental inconsistency with the stated objective of the mega program.

Using the framework above helps to put into perspective several of the comments made by the individual reviewers:

These and other specific comments by the reviewers question specific pathways by which smallholder production can be expected to translate into more consumption of animal-source foods by the poor; the framework described above begins to describe the complexity of the flows of products and associated benefits. It highlights the fact that there will inevitably be many leakages, but by focusing on pro-poor productivity improvements both in small-scale production and informal market systems, we do nevertheless in the end increase the availability, accessibility and affordability of animal-source foods for the poor, which is the goal.

A related set of questions have been raised whether animal-source foods are an appropriate mechanism for improving nutrition of the poor. For example, one reviewer notes:

We start from the principle that the high income elasticity for animal-source food demonstrates there is clear demand: the poor want more animal-source food in their diet. And they should want more: on pages 3-4 in the proposal, we highlight conclusions from the nutrition literature regarding the strategic nutritional value of animal-source food for nutritionally challenged populations, particularly those becoming increasing dependent on a narrower set of plant-based foods that do not offer the full range of micronutrients needed. Increasing supply and keeping downward pressure on prices in markets where the poor source their animal-source food will offset risks of relying strictly on least-cost foods.

Our question to you, then, is:

Do you agree or disagree with our reasoning and that it reflects the reality in low-income countries?

Please share specific examples, especially those that we can reference from the literature, that support your view. We would appreciate any suggestions that you feel would strengthen or otherwise improve our line of argument. We would particularly appreciate any examples that demonstrate targeting poor producers will benefit poor consumers. This will help us enormously in challenging our own arguments and tightening them up.

23 thoughts on “Review question 1: Will livestock and fish production ‘by the poor’ really contribute to nutrition ‘for the poor’?”