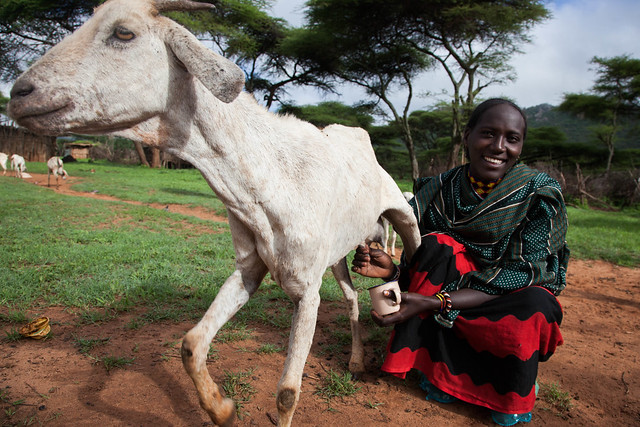 Men undertake a few tasks, while women engage in multiple activities, illustrating the complexity of their roles. Borana, Ethiopia

The design of research and development interventions in Ethiopia has long been hampered by a lack of gender disaggregated data. Working to overcome these data shortages, a participatory rural appraisal (PRA) exercise was undertaken in 2015 and 2016 into the gender characteristics of the small ruminant value chain sites in five regions of Ethiopia, one of the value chains of the CGIAR Livestock and Fish research program. The assessment helped guide development of gender profiles of 14 peasant associations in seven woredas (districts) in southern, western and eastern Ethiopia.

This brief, Community gender profiles across livestock production systems in Ethiopia found that differences in gender roles in livestock production are not only observed across regions, but also across farming systems. Men undertake a few tasks, while women engage in multiple activities, illustrating the complexity of their roles. Women are primarily responsible for dairy-related and small ruminant management activities across sites, particularly in the drier areas. Perceptions of gender in terms access to and control over resources were also found to vary from location to location, even among individuals of the same sex.

The authors, Wole Kinati of International Center for Agricultural Research in the Dry Areas and Annet Mulema of International Livestock Research Institute, suggest that interventions aimed at improving livestock production in general and small ruminant production in particular are more likely to help increase women’s incomes and enhance their economic decision-making position. Moreover, taking into account the context specific perceptions of men and women regarding gender issues, the authors recommend the introduction of innovations reducing women’s workload, freeing up their time to engage in economic activities and community affairs, helping improve their control over benefits and income. They also highlighted the important of understanding the cultural norms that govern the gender relations with each community.

The activity was funded through the Livestock and Fish and the International Fund for Agricultural Development (IFAD)-funded Improving the Performance of Pro-Poor Sheep and Goat Value Chains for Enhanced Livelihoods, Food and Nutrition Security in Ethiopia (SmaRT) project.