Improving animal health is the focus of one of the flagship projects of the Livestock and Fish CGIAR research program. It aims to identify and control animal disease threats, including those with public health dimensions, and improve the health of herds and flocks so livestock keepers can benefit from more productive animals and greater food security. 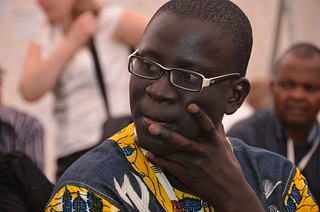 In 2015, ILRI scientists leading small ruminant and pig health projects in Ethiopia and Uganda took a special interest in the (human) gender dimensions of their projects.

Working with the Livestock and Fish Gender Initiative, veterinarians Barbara Wieland and Michel Dione carried out further gender analysis in their projects to discover ways this could improve the design and delivery of animal health gains to the communities they work with.

While both work on animal health issues, the project situations are quite different.

Dione’s work formed part the program’s work in the smallholder pig value chain in Uganda and focuses very specifically on the threats and control of African Swine fever (ASF). This is a huge menace. There are no vaccines yet, the disease spreads quickly and many animals can die in a few days. Entire herds can be wiped out.

Biosecurity is so far the only way to control the disease – preventing transmission and eliminating the virus in the farm. This requires knowledge, skills, money to buy disinfectant, and fast decision-making when an outbreak happens. While pigs may suffer from other chronic illnesses that limit their productivity, ASF outbreaks are the recurring ‘killers’ that also wipe out family incomes. 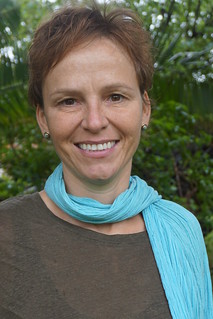 Wieland works in a project to transform the small ruminant – sheep and goat – value chain in Ethiopia. Like in Uganda, the health elements form part of a wider effort addressing the feeding, genetics and market dimensions of the whole chain. In the communities where she works, the sheep and goats are known to be especially close and critical to the livelihoods of women.

According to Wieland, participatory epidemiology studies in the project show “most animals have some loss of potential due to poor health and diseases.” Moreover, disease outbreaks leading to high mortality in animals are familiar to farmers.

Both projects started knowing that women have important roles in caring for their animals.

In Uganda, Dione wants to target ASF biocontrol interventions so better understanding gender roles, motivations and division of labour seemed a good way to gain improved insights. A literature review revealed hardly any past work in this area, so focus group discussions and surveys were carried out. Results showed indeed a “pattern of division of roles” in which women mainly do daily cleaning, feeding, watering, feed preparation and waste clean-up and men are involved in pen construction and off-farm marketing, purchase of feeds, and sourcing for pig health services and inputs. Women may sometimes take on tasks like spraying parasite control, treating pigs against diseases, heat detection and record keeping. Ownership of the pigs is a key factor in this division of tasks; women owning their own pigs tend to take on more diverse tasks.

Dione also noticed some trends that are important to his project. First, under ‘normal’ conditions without any outbreaks, women and men have clear role and task divisions with women especially taking on routine care and hygiene tasks and alert to any issues that may affect their own family’s health and hygiene. The women are thus often well-positioned to signal and detect animal health problems arising. Second, in these routine tasks, women come in close contact with detergents, chemicals, waste and potential zoonotic (animal to human) infections. These occupational risks and hazards need to be addressed. Third, when there is an ASF outbreak, gender norms and role divisions are put aside and all household members get involved in the biocontrol measures such as reporting to the local veterinary office, cleaning, disinfecting, isolating infected animals, heating swill to kill the virus, etc.

In Ethiopia, Wieland knew from previous work that diseases have a large impact on the productivity of small ruminants. Moreover, women, she says “directly depend on income from sheep and goats to run the household and to provide food for the family.” She was keen to use gender analysis to better understand the effects of animal diseases on households and their exposure to risks. The research approach followed a similar pattern as in Uganda: First a rather fruitless literature review followed by focus group discussions and household surveys. 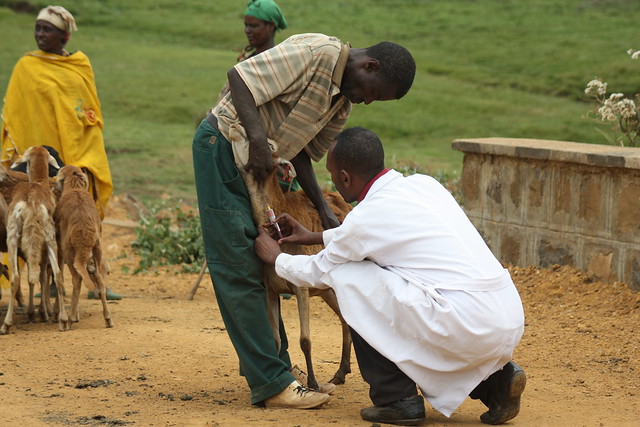 Results showed that that women “know as much as men about diseases of sheep and goats – and they often know a lot more.” This is because they also work closely with the animals, feeding and watering them, cleaning barns and looking after the young and the sick. Men help with feeding, take animals to graze, select males for breeding and sell animals. The result of this is that women and men tend to know about, and typically prioritize, different types of diseases. Women tend to pick up on respiratory diseases as they work with animals in the barn. Men may see an animal walking in tight circles – a clear symptom of coenurosis, a common brain parasite.

This, she says, has serious implications for disease control. Men are the ones who call in and pay for a vet. Women have little say in such matters and anyway, her sheep and goats may not be perceived to be as valuable as, say, a cow. So certain types of diseases may go untreated – not because they are unimportant, but because women and their animals are not taken seriously when managing animal health. Sick or dying sheep and goats have disproportionate effects on women. Healthy animal provide healthy livelihoods for women and their homes. They are buffers in bad times, they can be quickly sold to raise cash, they provide milk and food in the home. If they are lost through disease, a woman has few other assets.

Both scientists say the insights and results will lead to additional and differently-targeted interventions in their projects.

For Dione, the biggest change is in the ASF training that is offered. Typically, one person for household, usually the ‘manager’ was trained in biocontrol. Recognizing that an outbreak involves all of a family, future training will be broader to ensure that the women are involved and are fully informed about biocontrol measures. To ensure that the training is accessible to women, it will be ‘packaged’ differently to better suit their other commitments and needs. He will also explore ways this more inclusive training approach can be taken up by other projects in Uganda and by national extension services.

More generally, the project will look more closely at ways to minimize the daily occupational risks that women have as they care for their pigs.

In Ethiopia, Wieland has picked up on several important points. First, as diseases in small ruminants generally affect women’s livelihoods more than men (who may typically be more responsible for the more valuable cattle), the women have strong interests and motivations to participate in disease-control actions. The project will target women more specifically, ensure they are not excluded in planning etc., and train them apart. It will also explore ways to mobilize, train and support female community animal health workers to specifically work with women on the health of their animals. Women to women extension may open more doors to better health while such an approach could provide employment or business options for women.

Second, the project will seek ways to recognize and strengthen the role of women in detecting diseases. While the government is investing in improving reporting infrastructure, the system is hampered by poor disease awareness and underestimating what women know and can contribute. Targeting women in any disease surveillance and capacity building activities might be an effective way to improve reporting mechanisms, and being able to reduce or contain outbreaks.

Third, the project mobilized a number of vets and researchers to participate in the project. At the start, they typically were unaware of gendered approaches and perceived women to be uninformed about animal health. By participating in the project, their ideas changed. “The trained veterinarians changed their attitudes towards gender integrative research” and recognized that women have knowledge and insights they can learn from. The project will investigate ways these experiences can be taken wider in the veterinary profession, perhaps with the Ethiopian Veterinary Association and universities.

For both projects, the underlying sense is that women have greater potential and capacity to be more active players in animal disease management than was considered. This requires though that these roles are identified, valued and given support – through dedicated training, through adapted training, through new business opportunities, and through advocacy and awareness raising. Gendering animal health research has been a good start.

More information on the projects in Uganda and Ethiopia