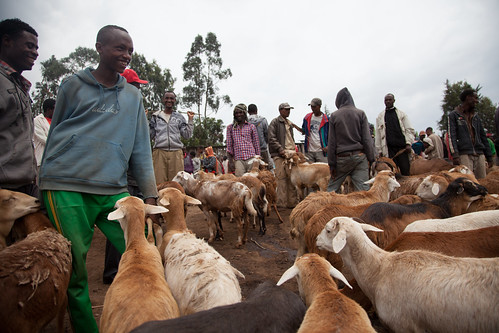 Selected participant farmers drawn from community-based breeding programs in Doyogena, Horro, Menz and Bonga sites are gearing up to undertake phase 2 of their sheep fattening project that runs from 15 January to 15 April 2016. Approximately 90% of the farmers who participated in the first phase have expressed interest to participate in phase 2.

The second phase 2 is being undertaken to internalize the best practices of the farmers and to give farmers a chance to do things better, particularly in aspects of feeding and management. In December 2015, approximately 80 experimental and control farmers from each of the 4 target sites joined orientation meetings organized by ICARDA and NARS researchers to share best practices from Phase 1.

At the beginning of Phase 1, farmers expressed their doubts about the project because various organizations had previously promised to undertake fattening projects with them but left without carrying out any activities. However, this time round, confidence seems to have been instilled in the farmers, thanks to the good collaboration of local researchers, agricultural officers, local enumerators, and ICARDA who accompanied the farmers throughout the project. The number of farmers interested to participate has risen by over 300% in all sites.

In Phase 1, the average daily gain (ADG) of sheep ranged between 85 – 107g across the ages of 6-12 months. There was no significant effect (P>0.05) of the initial age of fattening on the ADG of the rams although there was a tendency towards higher growth rates among the yearlings (10-12months). Younger rams aged 6-8 months tended to show higher feed conversion and thus higher cost benefit/kg. Ideally rams at 3 months generally show higher ADG.

However, farmers still resist the castration of ram lambs below 6 months old citing depression of growth potential in young rams. Consequently, ram lambs selected for the fattening program in Phase 2 will target 6-9 months of age. Previously, incorporation of locally available feeds was erratic, usually not uniformly fed across farmers, not quantified nor adequately recorded. Some farmers fed rams energy-rich feeds such as enset corm, and potato as well as kitchen left-overs on top of experimental feed. Farmers were advised not to feed experimental animals other than those recommended for the project. There was a tendency by a few farmers to share experimental feeds with other livestock species in their homesteads. Farmers were urged to avoid this practice as it only compromises ration balancing of fattening rams. However, the use of feeding troughs and watering troughs that had been supplied to participating farmers in Phase 1 was lauded by the farmers citing improved acceptance and feed intake by rams.

Farmers cited improvement of selling price of their rams due to their improved weights and body condition. A cost-benefit analysis calculated an average of 270-510 Birr ($13-25) profit per sheep fattened. However, they still expressed disappointments due to their very high expectations for higher earnings. Market linkages were not adequately exploited in Phase 1, however, improvements are anticipated in Phase 2. Phase 2 intends to systematically collect data of prices offered by the markets for rams in various weights and body condition and relay this information to farmers with the hope that they have realistic expectations in future.