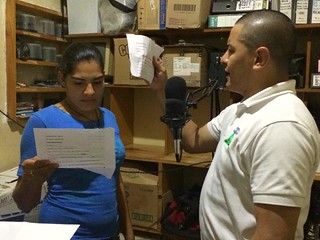 Seeking to address issues regarding the way men and women livestock farmers understand and manifest masculinity in their lives by identifying behaviours and dynamics linked to traditional gender roles in rural communities, the Livestock and Fish program recorded two radio vignettes with a group of five community members, in collaboration with Radio Camoapa, a local radio station located in the center-north region of Nicaragua.

The topics discussed in the vignettes emerged from focus group interactions, which were conducted using theater of the oppressed techniques and alternative methodologies to foster cooperative interactions among participants from different gender and age groups. Through the participation of a diverse group of women, men, and youth from local communities in this creative outreach initiative, the program proposes positive ideas to challenge negative perceptions around traditional gender roles.

One of the main issues raised in these focus groups included the phrase “Until the body holds out,” referring to physically demanding labor without rest as a sign of masculinity. This also involved being exposed to risky, sometimes violent situations. Another issue linked to this was the tendency for men to feel they must work and make decisions alone, as part of their duties as family providers. The radio vignettes addressed this by suggesting that farm and household information, decisions, and labour can be shared by all family members.

While reflecting on traditional gender roles in their communities, the focus group participants expressed that most public spaces are considered to be better suited for men than for women, including dynamics of control and how these roles emerge in the contributions each person considers their responsibilities in household and farm contexts. The vignettes challenged these ideas by including a situation where a man stays at home to rest after an arduous workday, while his wife attends a training session on improved pastures.

These vignettes were made possible by the CGIAR Research Program on Livestock and Fish, in collaboration with CIAT-Nicaragua, the Camoapa Women’s Group for Policy Influence (GRUMIC), and the Association for Municipal Development of Camoapa (ADM).

Listen to the vignettes: