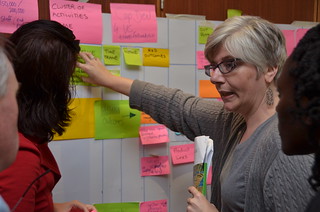 In 2014, Paula Kantor was a key member of the program’s gender team, researching gender-transformative approaches in livestock and fish value chains. She tragically lost her life in Afghanistan in 2015.

From 2012-2014, the CGIAR Livestock and Fish Research Program was structured in six Themes, three of which support the principal technology drivers of productivity and intensification in livestock and aquaculture systems: Animal health, animal genetics and feeds and forages.

Looking back  to 2014– and across the whole program portfolio – we identified three main activity areas were we worked. We also launched an important cross-cutting  ‘gender initiative’ to help our researchers make their interventions gender-equitable.

These activities resulted in: Wider access to simple tools to assess and prioritize feed resources, test phenotypes for feed and fodder quality traits and establish price–quality relationships for a wide range of feeds and forages; a set of publicly-accessible tools and approaches for VC assessment and benchmarking, animal – source food participatory rural assessment and gender value chain analysis; and a method for farmers to collect and access real time data on their cattle’s performance, informing their decision making on the future genetic improvement of their animals. The toolkits were the basis for consistent and comparable cross-country VC assessment and intervention prioritization in nine countries; they are also being promoted and taken up beyond CGIAR by VC practitioners and service providers.

The evidence published in World Development shows that there is a link between poverty aquaculture investments and poverty reduction. This is important as aquaculture was previously considered by some people as unlikely to benefit those with low incomes because of a tendency to produce large, high value fish.

The other activities are significant milestones in addressing either animal health, feed or genetics challenges identified in one or other of the program’s nine target value chains: The work on CBPP led to reagents being tested to perform in a range of field-based diagnostic formats as well as performance requirements for tools to control the disease. This is important as the reagents are a necessary first step to develop an improved, commercially available diagnostic test, which itself is essential to control the disease. The ASF work in Uganda led to a list of key factors to avoid and use to control ASF outbreaks as well as training and other materials that are being used to sensitize farmers and other value chain actors to adopt evidence-based biosecurity measures and create incentives to report suspected cases.

The genomics is generating data and guidance to help match best dairy cattle breeds for given production environments. The feeds and forages work identified new food-feed and forage cultivars to improve livestock productivity and reduce feed costs without additional land and water requirements and with reduced biological nitrification inhibition. The work on feed and forage options that increase intake of on-farm feed resources, reduce feed wastage and increase mill production is an important step in matching feed processing options with on-farm needs and available infrastructure.

These activities resulted in: Wider access to simple tools to assess and prioritize feed resources, test phenotypes for feed and fodder quality traits and establish price–quality relationships for a wide range of feeds; a set of publicly-accessible tools and approaches for VC assessment and benchmarking, animal-source food participatory rural assessment and gender value chain analysis; and a method for farmers to collect and access real time data on their cattle’s performance, informing their decision making on the future genetic improvement of their animals.

Some results? In Egypt, the program disseminated a genetically-improved strain of Tilapia, provided training for and by private sector partners and developed a business case for similar interventions in other countries; the policy work in Tanzania and Uganda is important as it helps build political acceptance that increasing livestock and fish productivity and achieving better-performing value chains can be accomplished through investment in actions supporting smallholders and small-scale entrepreneurs; in Bangladesh, the disease control activities led to policy change with the Department of Fisheries with the Department of Fisheries making it mandatory for all shrimp hatcheries to only supply healthy seed to farmers.

Findings show that the introduction of the dairy goats increased the workload of women and children, had positive impacts on the independence and perceived food security of both women and men, and increased women’s decision-making. However, these changes were limited in depth and scope, and did not question or challenge normative perceptions of gender-based roles. The study suggests the adoption of participatory and transformative approaches to gender analysis that builds empowerment pathways from the ground up while simultaneously working to influence the social environment in which movement along those pathways can be realized. The study is an important step in establishing an evidence base supporting CGIAR gender research on gender transformative approaches (GTA).

Recognizing that the Program was giving insufficient attention to gender, it initiated a gender action plan for gender mainstreaming. Working with specialists from Royal Tropical Institute (KIT), Themes assessed mainstreaming opportunities, held a writeshop to introduce livestock researchers to gender mainstreaming concepts, and established a group of ‘Gender Fellows’ interested to integrate gender analysis and perspectives in their own research.

See updates on our work in each country