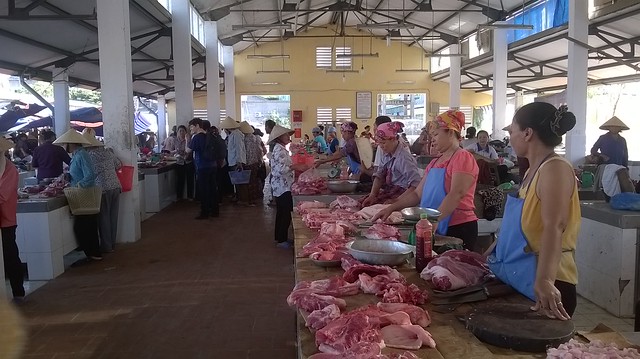 The evaluation team visited parts of the pork value chain as part of their review of the achievements of the program since its commencement in Vietnam in 2012 (photo credit: ILRI).

This year, the CGIAR Research Program on Livestock and Fish is undergoing an independent external evaluation to assess the phase one implementation of the program.

As part of the review, the evaluation team visited the Livestock and Fish value chains development research sites in the North Central Coast and the Central Highlands of Vietnam. The evaluation team was led by Anni McLeod, a livestock policy expert, and included Julie Fitzpatrick, an animal health expert. Vietnam is one of nine focus countries of the five flagship areas of the Livestock and Fish program, which is led by the International Livestock Research Institute (ILRI).

The evaluation team met with ILRI partners in Vietnam on 29 June to discuss achievements of the program since its commencement in Vietnam in 2012. Field visits to two sites in Vietnam—Ea Kar District in Dak Lak Province and Dien Chau District, Nghe An Province—took place from 30 June to 2 July. Hanoi-based ILRI scientists Lucy Lapar, Fred Unger and Thinh Nguyen, accompanied the evaluation team. A feedback meeting after the field visits with the evaluation team and ILRI was held on 3 July in Hanoi at the ILRI office where Steve Staal and Hung Nguyen were also present.

Role of native pigs in the Central Highlands

The Central Highlands, including Dak Lak and Dak Nong provinces, is a relatively new ILRI site, where the development of indigenous pig production is being explored as an area of focus in Livestock and Fish.

Traditionally and historically, in Dak Lak, pigs are raised as free-range livestock, but this practice has been criticized for causing environmental damage and spreading diseases, some of them zoonoses, and local policy has instituted the ban of free-grazing pigs. As a response, smallholder farmers have made the switch to raising indigenous pigs that are stall fed with cut-and-carry feeds. But this new setup is costly, making native pig production less profitable.

ILRI was advised by the evaluation team to undertake a comprehensive study on potential indigenous pig markets inside and outside Dak Lak province, as a basis for sustainably developing an indigenous pig production system and market in the region. A scoping study recently completed by ILRI with Vietnamese collaborators in Tay Nguyen University shows there is a potentially large market for indigenous pigs which are used for specialty dishes in urban centers like Ho Chi Minh City and Buon Ma Thuot in Dak Lak.

Ethnic minorities are involved in wild pig production in the area, and their success can be attributed to selling 50% of their pigs and meat products to other provinces. Cooperative members are also expected to comply with strict methods on pig raising and slaughtering to ensure food safety.

The evaluation team with ILRI staff then moved north to Nghe An Province, in the North Central Coast region, where two communes in Dien Chau District, namely, Dien Tho and Dien Trung, were visited. In these communes, pig production plays an important role, accounting for around 40% of total GDP.

The evaluation team met with heads of the commune, animal health team and slaughterhouse and farmers applying ‘Vietnamese good animal husbandry practices (VietGAHP)’, a set of guidelines for best practices in pig production that has been rolled out to selected provinces in the country under a Livestock Competitiveness and Food Safety Project (LIFSAP).

As part of LIFSAP, wet markets and small and medium slaughterhouses have also been upgraded and ILRI is organizing a survey of pig producers to evaluate VietGAHP as a potential best-bet intervention under the Livestock and Fish project.

The evaluation team also met with two representatives from Nghe An Department of Agriculture and Rural Development (DARD), who expressed interest in collaborating with ILRI in assessing the effectiveness of the first phase of LIFSAP.

The DARD team acknowledged ILRI’s role in helping change perceptions of the local authority on the role of small-scale pig production through the ILRI-led pig sector studies in Nghe An, and said they are exploring using workshops/meetings to further disseminate these research findings.

The Vietpigs blog has more details on Livestock and Fish value chains research in Vietnam.