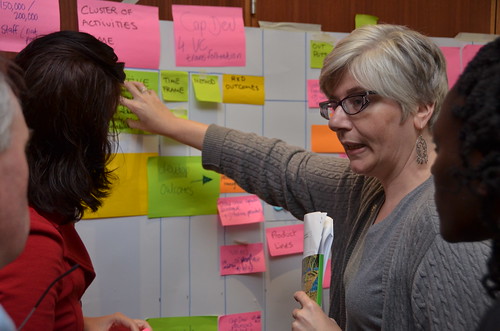 Paula Kantor at the 2014 Livestock and Fish program review meeting

The tragic loss of Paula Kantor during a terrorist attack in Kabul, Afghanistan on Wednesday 13 May 2015 has left many of her colleagues in the development world and friends with great sadness.

Kantor, who joined the International Maize and Wheat Improvement Center (CIMMYT) in February 2015 as a senior scientist (gender and development specialist), was leading CIMMYT’s ambitious new project to empower and improve the livelihoods of women, men and youth in wheat-based systems of Afghanistan, Ethiopia and Pakistan.

Prior to joining CIMMYT, she worked with WorldFish from 2012 and was the WorldFish gender flagship focal point for the CGIAR Research Program on Livestock and Fish. Kantor passionately supported the Livestock and Fish gender strategy on gender transformative approaches. Her passion and commitment to integrate gender and positively transform the aquaculture value chains to benefit poor men and women in these value chains will be remembered by all who interacted and worked with her.

‘Paula was absolutely the epitome of a CGIAR scientist through her commitment to excellence in her science and her commitment and patience to improving the quality and meaningfulness of the work done with her colleagues and partners. And what a delightful person. This is a huge loss for us, and I can’t begin to imagine what it is for her circle of family and friends.’– Tom Randolph, Livestock and Fish Program director.

‘Her commitment to improving the livelihoods of women in some of the world’s most impoverished regions will be her legacy. Paula’s passing is a loss to the whole development community.’– Stephen Hall, WorldFish director general.

‘Energy, commitment and integrity are words that only begin to describe the astute gender and development expert and colleague that Paula was. She was one of a kind and will be sorely missed by those who were fortunate enough to have known her.’– Maureen Miruka, CARE USA and Livestock and Fish Science and Partnership Advisory Committee member.

‘Paula brought to the Livestock and Fish gender team the excitement and wisdom of a versed scholar committed to researching gender issues with and for poor farmers. She was committed to improving rural livelihoods while enhancing social and gender equity, dignity, and justice. She practiced these principles in her daily interactions with colleagues. She listened and appreciated opinions, discussed and advanced them to co-create new spaces for social transformation. To those of us who worked with her, Paula provided inspiration, mentorship and friendship. We miss her greatly in our work and life.’– Alessandra Galie, ILRI social scientist.

Our deepest condolences to her family, friends and colleagues on the loss of a great person.