Composite of parts of two paintings: A Cow Like That Gives 5,000 Liters a Day, by Maria Primachenko, and Fish, by Aldemir Martins (both via WikiArt).

In late-March, the Livestock and Fish Research Program held a virtual review and planning meeting to take stock of progress since 2012, examine the wider science and development environment and devise plans and deliverables for the coming years. The discussions were organized around each of the five research and technology ‘flagships’ of the program, examining strengths, weaknesses and desired results.

The Animal Genetics Flagship works to ensure that by 2023 choices of improved and appropriate livestock and fish breeds and strains are widely available, used sustainably and are equitably providing nutritious, affordable food and income for the poor.

The flagship in a nutshell
Demand for healthier, higher performing and higher yielding animals through genetic improvement and the dissemination of those genetic gains to animal producers is increasing in the developing world, where rising populations and incomes are raising the need as well as demand for nutrient-dense milk, meat, fish and eggs.

In response, many small-scale livestock and fish producers, processors and service providers are working to become more commercially oriented. At the same time, global warming is causing many of them to have to cope with more variable and extreme climates and most face on-going reductions in their access to fresh water, productive lands, healthy agro-ecosystems and other natural resources.

What’s needed are animal stocks better tailored to their (changing, resource-scarce) environments and more profitable, efficient and sustainable smallholder animal production systems. Animal genetics, along with animal health and feeds, is one of three traditional pillars supporting such transformation.

Recent advances in molecular genetics and genomics enable scientists not only to characterize the genetic diversity and compositions of breeds and to develop higher yielding stock, but also, increasingly, to identify the genes controlling other important and complex animal traits such as resistance to disease and drought and resilience in the face of fodder scarcity and harsh environments. These scientific advances are particularly critical for programs aiming to improve developing-country livestock and fish, which as yet still greatly underperform compared to the improved breeds and strains of livestock and fish that are the mainstay of industrialized countries.

The Animal Genetics flagship is identifying and promoting improved breeds and strains as well as developing new ones. It is developing robust delivery systems that ensure that poor livestock and fish producers can access these genetic resources. The flagship employs both traditional and novel animal breeding approaches adapted to the low-input systems used by smallholder food producers. It makes use of the latest technologies in phenomics (measurements of the changing physical and biochemical traits of organisms in response to genetic mutation and environmental influences), genomics (molecular investigations of the structure, function, evolution and mapping of genomes) and reproductive biology (studies of the mechanisms regulating reproductive processes in livestock and fish).

In both its development and delivery work, this flagship also makes use of advanced information and communications technologies, tools and methodologies promoting gender equity, and programs strengthening capacities for livestock and fish research and development work.

John Benzie, a fish geneticist at WorldFish and leader of the flagship, started the virtual discussion with a short overview of the work of his flagship. Click on the presentation below to listen to his audio-enhanced slide presentation.

The 40 comments fell into four major topics:
1) Who should decide on the breeds and breeding goals for a given farming system
2) The long time scales needed to develop genetically improved animals and fish
3) The importance of local building capacity to maintain animal breeding programs
4) The need to build an evidence base for continued investment in genetic improvements

Benzie stressed the need for genetics, genomics and reproductive technologies. He argued that we need genetics to better match animal and fish stock with farming systems, genomics to improve breeding, and reproductive technologies to deliver our improved genetics. He said what’s needed are the cash and skills to maintain breeding programs and the networks able to get breeding materials to farmers. Other participants mentioned we also need the following:

Progress so far …
Benzie also noted that in recent years researchers had produced a locally suitable GIFT strain of tilapia (O. niloticus) in Asia, an Abbassa strain in Egypt, an Akosombo strain in Ghana and a strain of indigenous fish (O. shiranus) in Malawi; they had assessed the genetic resources of the small mola fish in Bangladesh due to its importance for women and young children; and they had new work on carp in Bangladesh that should produce an improved fish by 2030 (‘a fairly quick turnaround’!).

Okeyo Mwai, a livestock geneticist at ILRI, added that scientists had genetically improved indigenous disease-resistant red Maasai rams and flocks in collaboration with local Maasai pastoral communities, and were combining genomic and ICT technologies, which is speeding development of more precise breeding objectives and delivering desired genetic gains faster. In Ethiopia, said Aynalem Haile of ICARDA, the emphasis has been more on expanding the use of community-based breeding programs.

What’s next …
‘I’m looking forward to seeing the extent to which the proposed breeding and delivery programs embrace various production systems along the gradient of intensification,’ said Amos Omore, a veterinary epidemiologist at ILRI and leader of the program’s value development team in Tanzania.

There has never been a better time for the science of animal genetics, with very recent (and very big) breakthroughs in the fields of genetics and genomics promising unprecedented refinements in breeding work. This group of CGIAR Livestock and Fish scientists is working to ensure that those breakthroughs benefit small-scale livestock producers and consumers throughout the developing world.

Participants in the virtual discussion 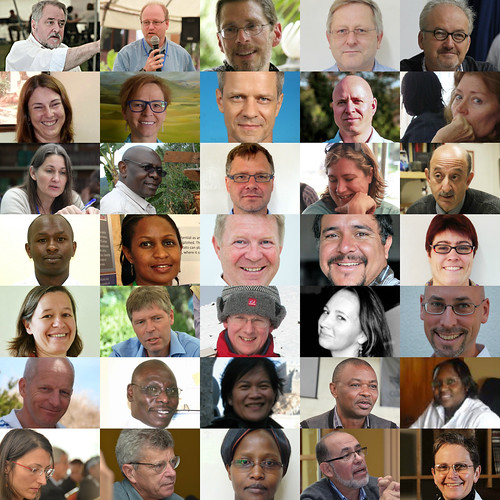 More from this flagship