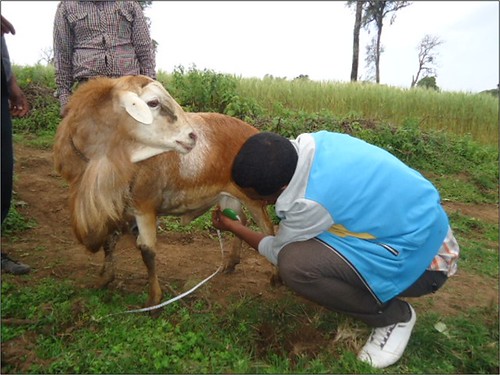 Genetic improvement of small ruminants has been identified as a “best bet” in Ethiopia’s highland areas. As part of the Livestock and Fish small ruminant value chain development activities in Ethiopias, community-based breeding programs established through an earlier project (located in Horro, Menz, Bonga and Abergelle) were strengthened and new ones were established in Atsbi and Doyogena.

Community-based breeding ensures farmer participation in selection and breeding processes, from inception through to implementation. Community-based goat and sheep breeding programs (CBBP) in Ethiopia have been promoted and implemented jointly by the International Center for Agricultural Research in the Dry Areas (ICARDA), the International Livestock Research Institute (ILRI), the University of Natural Resources and Life Sciences (BOKU), and partners from the national agricultural research system.

The breeding objectives are to accomplish (i) accurate control of the timing of reproductive events; (ii) maximize the number of females giving birth; and (iii) ensure the survival of newborn kids, and their ability to grow and mature into productive animals. In the context of genetic improvement, reproduction should also be a successful vehicle to effectively disseminate improved genetics in the base population.

Through advances in reproductive technology, a small number of top rams and bucks can be used to serve a large small ruminant population. In addition, each ram or buck is able to produce a larger number of offspring in a given time, thus enhancing the efficiency of progeny testing. The high intensity and accuracy of selection arising from these technologies can also lead to a fast rate of genetic improvement. Furthermore, producing and then disseminating healthy rams is a precondition for a longer-term certification process of the improved genetics generated from CBBP’s.