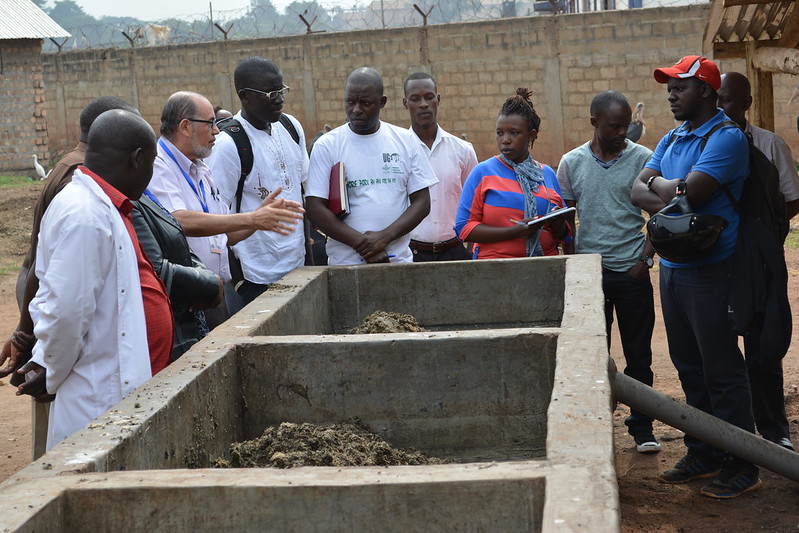 Danilo Pezo of ILRI engages project staff and partners at the handover of a biogas plant at Wambizzi (photo credit: ILRI/Brian Kawuma).

Wambizzi, the only pig abattoir in Uganda is located in Nalukolongo, west of Kampala city and handles up to 150 pigs a day. It supplies a large proportion of the pork consumed in the city. But the facility has long been dogged by environmental issues stemming from poor waste management and excessive use of firewood for heating. Until recently, waste from the facility was dumped into a stream that flows through the neighbourhood or incinerated in a waste pit attracting the ire of neighbours and city authorities.

‘We have had a couple of run-ins with the Kampala Capital City authorities because of complaints about our waste disposal in the stream and the stench polluting the environment,’ says Justine Nabukeera, an executive committee member of the Wambizzi Pig Cooperative Society which manages the abattoir.

But things are changing. Projects led by the International Livestock Research Institute (ILRI) and partners are improving waste management at the Wambizzi abattoir as part of wider efforts to improve pig production and pork marketing in the country.

On 25 February 2015, a newly-constructed biogas plant was handed over to the Wambizzi cooperative as one of the outputs of the smallholder pig value chain projects in Uganda. Construction of the plant was funded by Irish Aid through the ‘More Pork For and By the Poor’ project and by the Deutsche Gesellschaft für Internationale Zusammenarbeit GmbH (GIZ) through the Safe Food, Fair Food project, both or which are implemented by ILRI in collaboration with Makerere University’s College of Veterinary Medicine, Animal Resources and Biosecurity. The plant was constructed by Green Heat, a private contractor in Uganda. 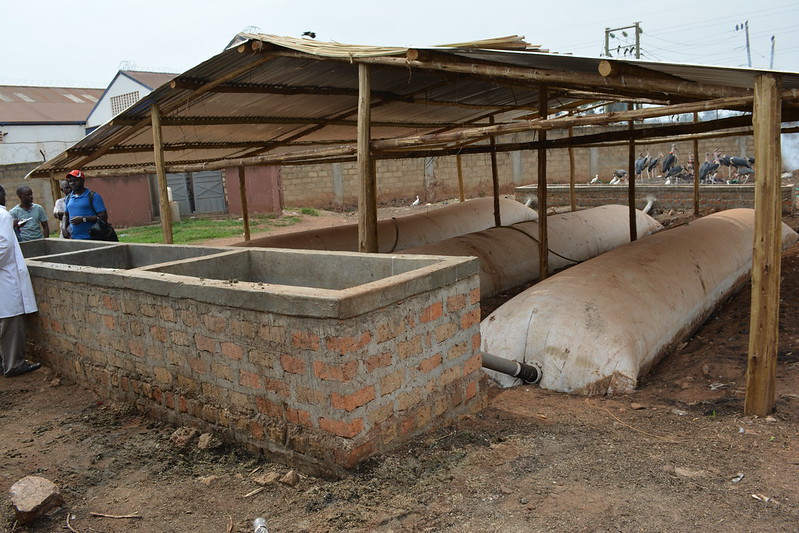 The biogas plant comprises three flexible balloon digesters with a capacity of 10 cubic metres each. These transform waste (blood, dung, water and animal parts) from the pig slaughterhouse into methane gas that is then used for heating the water required for scalding the pig carcasses. The effluent produced from the digesters is being assessed for its value as an organic fertilizer for crops like maize, rice and beans.

According to the managers of the abattoir, reduced use of firewood is one of the immediate benefits of having the biogas plant. The facility previously spent between UGS 10,000 and 20,000 (USD4 – 8) daily on firewood for heating water, which sometimes went higher in times of firewood scarcity or during crackdowns on illegal timber sales.

‘It is much easier to heat water now because we have this plant,’ says Thomas Kasule, a treasurer at the cooperative, ‘and the gas also heats water faster which saves time and costs almost nothing.’

Read about the process of constructing the abattoir in this related blog article.