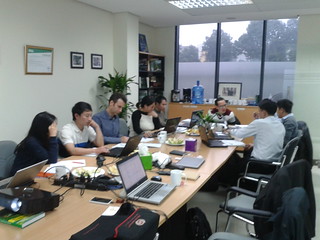 Three weeks ago, I traveled to Vietnam to provide methodological support on how to calculate production costs, margins and profits in value chains as part of the REVALTER project on future prospects for livestock in Vietnam.

The International Livestock Research Institute (ILRI) has partnered with other French and Vietnamese research organizations in this project funded by the Institut de Recherche pour le Développement (IRD). REVALTER is also mapped to the Livestock and Fish CGIAR Research Program, the program contributes to some of the time of the ILRI researchers involved.

Using a method similar to the one I had already used in West Africa two years ago, we spent two days discussing the accounts tables of producers, traders, processors and retailers in the pig and milk value chains of Vietnam. The objective was to come up with numbers for costs, and especially profits, which could be compared between the different actors of a value chain.

Indeed, as I explained in my preliminary presentation in the seminar we organized to showcase our results to ILRI and ICRAF colleagues and to Vietnamese researchers from the Malica consortium on markets and agriculture linkages for cities in Asia, it is very important to find a common product unit on which to compare the costs and profits of value chain actors. For example, the farmer’s profit of 1$ per kg of live pig should not be compared directly with a profit of 5$ per kg of ham sold by the retailer. There have been many steps to transform the live pig into ham, and costs involved in this value addition for the collector, slaughterer, processor, wholesaler and retailer, which help explain the large difference between farm gate and consumer prices. These differences can be particularly wide for livestock products, which usually go through some elaborate processing before reaching the family dinner table, in forms that are very unlike the live animal the products came from.

Our preliminary results show that pig value chains studied in the rural Northwestern mountainous province of Son La are actually quite lean in terms of profits accumulated along the value chain. When calculating all the costs and profits of the value chain actors per kg of final consumer product, we realized that when a butcher-retailer sold 1 kg of pork ham on Mai Son city market, she (very often a woman’s activity) kept 42% of the final retail price as profit while the farmer who raised the pig had received 29% of that same final retail price.

This can be seen as relatively equitable given that there are only three actors in this value chain (farmer, slaughterer and butcher-retailer) and that it is the butcher who has done most of the work cutting up the pig carcass into different consumer meat cuts, including the ham. Furthermore, when comparing the total costs and total profits accumulated along this pork value chain, we saw that while farmers bore 10% of all the costs involved in producing 1 kg of ham, their profit was 33% of the total profits gained by all three actors in the chain. The retailer’s share of costs (53%) was roughly the same as her share of profits along the chain (48%). It looks like the slaughterhouse is the actor losing out in this chain: it bears 37% of the costs in the chain but only gets 19% of all the profits.

And the pig value chain is even leaner in the Southern peri-urban province of Dong Nai where strong consumer demand for pork meat in Ho Chi Minh City is driving a very competitive market for pigs. Pig farmers in Dong Nai pocket 40% of the total profit gained along the chain whereas collector and city butcher-retailer share out equally the remaining 60% of profits from the sale of 1 kg of lean pork thigh meat. Furthermore, the collector and retailer’ profits amount to around 15% of their respective selling price while 27% of the farmgate price is profit for farmers to pay their family labour and their other living expenses.

So for both these cases, who said unorganized producers are being exploited by rapacious traders? The dynamic and very competitive market for pork probably helps explain the economic efficiency of these two Vietnamese pig value chains.

See here the preliminary results of this research activity comparing costs and margins of the chain actors per kg of final consumer product. This common denominator is relevant for a wider audience because we can all relate these figures to the kg of ham or steak that we find at the butcher’s. Further analysis is needed in order to compare costs and margins along the chain per kg of pig carcass.

This new common denominator will be particularly useful for pig value chain actors to identify the inefficient steps in the value chain in order to take further action in improving their chain.