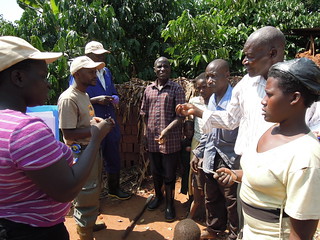 ‘Pig farmers in Uganda have decided to form a mutually-aided association for better marketing of their products and as a forum for sharing ideas.

‘A steering committee chaired by former executive director of Uganda Investment Authority, Maggie Kigozi, was elected by farmers during a pig farmers’ training, which took place from July 11 to 12, to kick-start the eventual formation of the Uganda Pig Farmers Association (UPFA).

The training, second to be held this year after one held in February, was organized by the Pig Production and Marketing Uganda Ltd (PPM). Christopher Mulindwa, PPM production manager noted that Uganda was a long way from exporting pig products because current production cannot even satisfy the local market.

Marketing issues in the Ugandan smallholder pig value chains are some of the constraints identified by the International Livestock Research Institute (ILRI) pig projects operating in Uganda. The Livestock and Fish team in Uganda supports the formation of the association which they have noted as one of the ways for improving pig production in Uganda. The Uganda team has been taking part in the trainings organized by PPM as resource persons and also conducting training sessions on various topics.

Working with partners such as PPM contributes to key elements of the Livestock and Fish approach of working along the entire value chain with producers, input providers, traders, processors and consumers. ILRI has been providing technical support and information to PPM, a private company in Uganda, that would make it more effective.

Danilo Pezo, coordinator of the Smallholder Pig Value Chains Development (SPVCD) project gave the opening remark for the two-day training, emphasizing on the constraints and opportunities in the pig sector found through ILRI’s work in Uganda and Kristina Roesel, coordinator of the Safe Food Fair Food project conducted a training session on pig zoonoses.