The Uganda Smallholder Pig Value Chains Development (SPVCD) project held three feedback workshops in November 2013 to train facilitators and to disseminate results of the value chain assessment conducted in three districts (Kamuli, Masaka and Mukono). The aim of the assessment was to characterize the pig production and marketing systems, identify constraints and opportunities faced by different actors of the value chain, select potential interventions for pilot testing and identify key elements and variables to consider for benchmarking surveys. 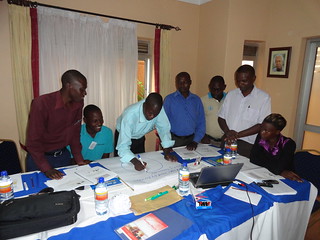 As a preliminary step, 16 project partner institutions facilitators from the local governments of Kamuli, Mukono and Masaka and the Voluntary Efforts for Development Concerns (VEDCO), as well as four local consultants involved in the collection of value chain assessment data were briefed on the key results of the assessment and trained on how to deliver information to farmers. Materials were prepared in the local languages (Luganda for Masaka and Mukono, and Lusoga for Kamuli) for the feedback sessions with farmers.

After the training workshop, the project team conducted feedback sessions in Masaka and Mukono to present the results of the assessment with particular emphasis on the constraints and opportunities that can be exploited as a means of households poverty alleviation in rural and peri-urban communities. In both districts participants were representatives of the local government, National Agriculture Advisory Service (NAADS), farmer organizations and NGOs working with smallholder pig producers. Thirty two participants (22 male, 10 female), attended in Masaka and 37 participants (25 male, 12 female) in Mukono. The feedback sessions in Kamuli will be held in June 2014.

The facilitators then conducted village-level feedback sessions in 15 villages in Masaka and 12 villages in Mukono. These activities were coordinated by the district veterinary officers (Drs. Lawrence Mayega and David Kiryabwire, for Masaka and Mukono, respectively). A total of 1015 farmers (762 female, 253 male) participated in the feedback sessions in Masaka, and 810 (560 female, 250 male) in Mukono. 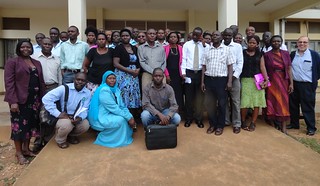 ‘This is one of the few projects operating in Mukono that has reported to stakeholders on the results of the studies conducted in the district. The information provided is very valuable, because we learnt about the constraints and opportunities in the pig sector of the district that will help us in the local government to plan activities in favor of the smallholder pig farmers operating in peri-urban and rural settings in Mukono district. We look forward to continuing joint efforts with ILRI for improving the pig value chains in our district’ said Fred Muluku, district production officer of Mukono.

‘After the district authorities and ILRI conducted the focus group discussions, we realized the need to move from an association to a cooperative, and now we have more than 100 farmer members, and the cooperative has been formalized. We are convinced that working together as a group we can learn better practices for producing pigs at small scale, but also empowers ourselves to get better prices in the market, have access to quality inputs, and even to credit. Also, is in our plans to develop facilities for proper slaughtering of pigs. We need the assistance and guidance of the ILRI team, the district veterinary officer, NAADS and other institutions in Masaka to find ways of improving pig production in our communities. The results presented in the feedback workshop has opened our eyes on what we need to improve in our farms’ said Samuel Ssekyondwa, secretary of the recently formed Kabonera-Kyanamukaka Pig Farmers Cooperative.