In 2013, the Livestock and Fish CGIAR Research Program added Bangladesh as its second aquaculture value chain after Egypt. Fish is the most important food after rice in Bangladesh, in addition Bangladesh is the world’s fifth largest aquaculture producer. 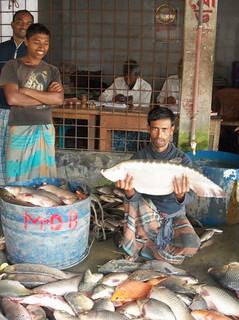 Big issues relate to fish seed and feed quality and availability
The smallholder aquaculture sector in Bangladesh is a poly-culture story. Smallholder pond systems typically produce a combination of fish, shrimp and prawn types in an intelligent husbandry practice that uses a range of species to exploit different ecological niches in ponds. The species mix varies in response to changing water and salinity levels as farmers adapt to Bangladesh’s annual inundation. Moreover, this smallholder “gher” system species mix responds well to two sets of household needs, namely that of cash and food.

The aquaculture value chain is a “fish and shrimp” chain whose respective species leverage the presence of others. The logic would appear to be that shrimp and prawn farming is the economic attraction that draws producers into intensive commercial production, and that this has paved the way for more intensive commercial carp production for local markets. In addition, Mola and other small indigenous species are seen as very important by small farmers and poor consumers alike.

In addition, the aquaculture value chain is made up of hundreds of thousands smallholder producers. A lot of the development of the industry has been unplanned and emergent in response to growing market demand.

Food safety
Driven by the high cost of ice required for an effective cold chain, fish traders are spraying or injecting formaldehyde on and into fish. This practice has become widespread and occurs not only in Bangladesh, and is not restricted to fish. It is apparently used on other agricultural commodities such vegetables. Consumers are now avoiding formalin treated fish, and use the presence of flies around a fish as an indicator that the fish is not treated with formalin.

Team meeting
We held a meeting with key stakeholders working on aquaculture in Bangladesh to present the Livestock and Fish program and engaged in questions around alignment. The sentiment was that the program was highly complementary to AAS work, and added important value chain dimensions beyond the production focus. 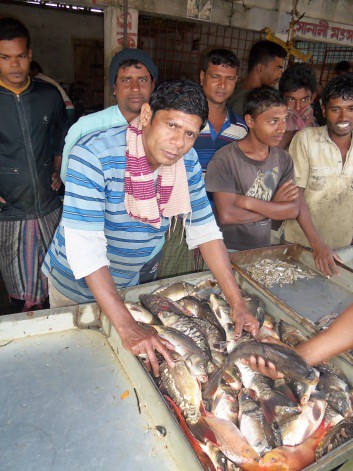 The team traveled to Khulna district and city in the south west of the country. This is where most WorldFish work in the country occurs and the team were taken around a night fish market, a local morning fish auction centre at Arong Ghata, a carp hatchery, a farmer producer group and the main Khulna auction centre at Fal Tita.

Local auction: Here the team observed morning sales of fish and shrimps being sold by auction in a small local fish market. Producers sold their fish to traders through an auctioneer in quantities that ranged from 1kg to 20kg. Buyers were buying and aggregating and taking these to other markets or shops in other local settlements. In an interview with Mustafa, a 35 year old trader, who had bought 1,600kg of fish, we learned that he had started this trade with 60kg a day when he was 21 years old. His business has grown because it is profitable. He buys and sells every day.

The hatchery: The team visited a commercial hatchery run by a family group. The co-owner and manager, Shahbuddin walked through his process. This was the largest of three hatcheries in the district. A large pond of approximately 4 hectares supports some €50,000 worth of breeding carp. The brood stock of this came from an initiative stimulated by the USAID funded and WorldFish implemented Aquaculture for Income and Nutrition (AIN) project. The project works with hatcheries to increase the genetic quality of brood stock in a process that replaces existing, poorer quality brood stock. Shahbuddin has invested €150,000 to build the hatchery and buy brood. He secured a loan from a Bangladesh Government agricultural development fund, which under the terms of this fund means that he has to pay no interest for the first 8 years and has ploughed back profit into the business. He started the business having observed a market paucity of good fry.

Farmer group – Kharnia, Dumuria Upazila, Khulna District: The team met representatives of a group of 25 farmers. Most of the conversation was centered around the experiences of Abu Hanif and his wife Munila. They own and farm 3633m2 of land, some of which Hanif inherited from his father, and some of which he purchased. Hanif’s father had only cultivated rice and after having seen the experience of other farmers in the area, Hanif decided to practice aquaculture when he was 21 years old, and now operates an integrated fish, rice and vegetable system, i.e. a ‘gher’. 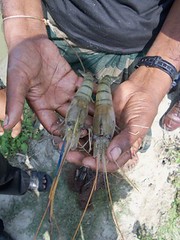 The ponds contained mixed species of salt water shrimp and fresh water prawn, various carp sub species, mullet, mola and other small indigenous species. The balance between salt and fresh water species reflected adaptability by the farming system to cope with sudden changes in salinity from inundation. The AAS program has engaged with this indigenous knowledge to offer support in the form of farmer group formation for the purposes of technology transfer and livelihood improvements.

Hanif says that the majority of his income comes from aquaculture. Of this, 30% comes from salt water shrimps, 50% from fresh water prawn, and 20% from fish. Typical gher production is approximately 400kg of fish and 300kg of shrimp/prawn.

The group described themselves as a forum whereby they could share experiences about what they are doing. An example was provided for when a viral disease hit one pond, the other group members were able to react immediately to prevent spread. The group also make block orders with suppliers, and organise a common rice buyers to come on specified dates, whereupon they can all harvest and sell. They said that after the project closes, they will continue to work as a group.

WorldFish, a program partner centre, will be leading the Bangladesh activities and has been conducting research in the area through the AAS CGIAR Research Program. This story was contributed by Stuart Worsley.