Africa / Aquaculture / Egypt / Fish / Genetics / LIVESTOCK-FISH / WorldFish
WorldFish hosted an open day on Monday 15th October at its Abbassa research center in Sharkia, Egypt to showcase its latest research and development initiatives, with the support of the Minister of Agriculture and Land Reclamation, Dr. Salah Abdel Mooemin.
The Malaysia-based international research organization has had a fisheries and aquaculture research program in Egypt since 1998, and has been a major player in helping aquaculture to grow and become the main source of fish for Egyptian consumers.
Statistics show the country’s fish farms produced over 900,000 tonnes of fish in 2010, whereas the industry was only one third of this size ten years earlier. 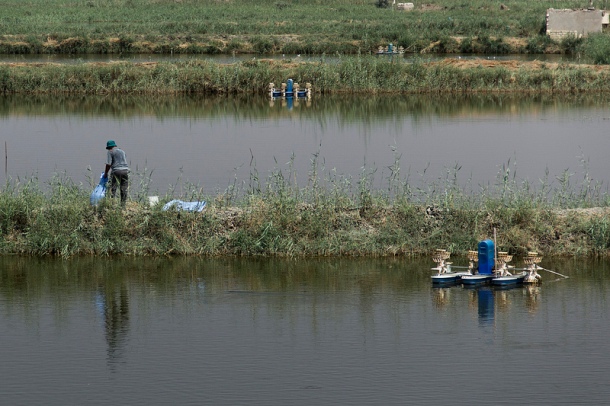 WorldFish Country Manager, Dr Gamal El Naggar explained, “Egyptian aquaculture is a remarkable success story and we can be proud of the role that WorldFish research has played in its development. The 200 feddan research center has been used as a training and testing ground to develop the technicians and procedures for fish farms in key aquaculture areas such as Kafr el Sheikh, Behera, Fayoum and Sharkia.”
“Despite this remarkable success, there are still some issues and challenges that should be faced and dealt with to assure continued advancement of this vital sector and sustain Egypt’s leadership in this sector both on the regional and global levels,” he added.
At the open day, Dr Abdel Rahman El Gamal explained the important role that the WorldFish Abbassa research center has played over the past 13 years in teaching 1500 trainees from more than 100 countries.
Meanwhile, Dr Nabil Ibrahim from the Abbassa genetics team described how Abbassa has also been the base for a selective breeding program for the last 14 years that has developed faster growing strains of tilapia and catfish.
“This work is now going beyond the research phase with the release of Abbassa strain of Nile tilapia to the fish farming community,” commented Dr Gamal El Naggar.
Tests have shown that the new strain of Nile tilapia grows at least 30% faster than existing commercial strains. The improved strain has been distributed to five broodstock multiplication centers who will supply breeders to the several hundred tilapia hatcheries spread across the main fish farming areas of the country.
While development of the improved strain was funded by the Egyptian government and the EU, its distribution is one part of a new three-year project supported mainly by the Swiss donor organisation, SDC. The new project, jointly implemented by WorldFish and the NGO, CARE, aims to improve employment and access to fish by securing the profitability of Egypt’s aquaculture industry.
Other project activities include training, support for Producer Organizations, improving the livelihoods of women retailers and expansion of aquaculture in Upper Egypt.
Project Leader of the SDC funded IEIDEAS project, Dr Malcolm Dickson commented: “Egyptian aquaculture already makes a significant contribution towards employment and incomes and has the potential to make an even bigger contribution in the future. There are 14 full-time jobs created for each 100 tonnes of annual production and a total of 100,000 jobs in all aspects of the supply chain.”
“Egypt is a clear leader in this sector in Africa and the Middle East however there are major challenges ahead. The industry needs supportive policies and legislation to secure its success. It also needs to look beyond current markets to ensure future profitability,” he said.
WorldFish, a member of the CGIAR Consortium, is an international nonprofit research organization committed to reducing poverty through fisheries and aquaculture. CGIAR is a global partnership that united organizations engaged in research for a food secure future.